Several months ago, I stumbled upon Derek Low’s slightly clickbaity blog post - “Across the USA by Train for Just $213”. And, of course, there have been numerous counter-blogs pointing out that just because one can sit in a train for four straight days does not mean that one should. But this blog planted a seed in my head about just how large the United States is, and while most people spend their time on the coasts or in the cities, there are vast swaths of land most people never bother to visit. So a friend and I embarked on the same trip that Derek did, stopping in many of the same locations. For most of US history, rail was the premier way to travel across the country, and while the invention of the modern highway led to many older railways being destroyed for cars, we still have quite a few operational railway paths connecting most of the major cities.

Amtrak itself is a remarkably comfortable ride, even on coach. Every pair of coach seats has plenty of outlets to charge electronics, can comfortably recline the headrest as well as a comfortable footrest. Overall, it reclines about sixty percent of being a completely flat bed. As someone who cannot sleep on plane rides at all, I was pleasantly surprised at how easily I could sleep on the train. It still wasn’t great quality sleep, but overall far more relaxing mode of transportation than plane rides.

Amtrak trains have the general format of having two or three sleeper cars in the very front. Sleepers are more expensive but offer amenities like showers and full sized beds. Behind the sleeper cabins is the dining car which serves three meals a day and offers a restaurant-style sit-down experience for meals. Overall, the meals were fairly decent (though, due to the schedule of our trips, I only had a chance to eat breakfast and lunch). They were a bit expensive, but the quality was definitely better than airplane food.

Behind the dining cabin is the viewing car which is a two levels. On the top is a viewing platform with tables and chairs and extra large windows. On the bottom level are bathrooms and a snack cafeteria where passengers can buy hot and cool snacks and drinks at most hours of the day. The viewing car is, naturally, where I spent most of my time - that was the purpose of embarking on a trip like this, after all. The tables are meant to be shared among various passengers, and it’s not uncommon for strangers to come and sit next to you. Many people opt to write on trains, and in fact Amtrak has a writers residency program for just such a purpose. 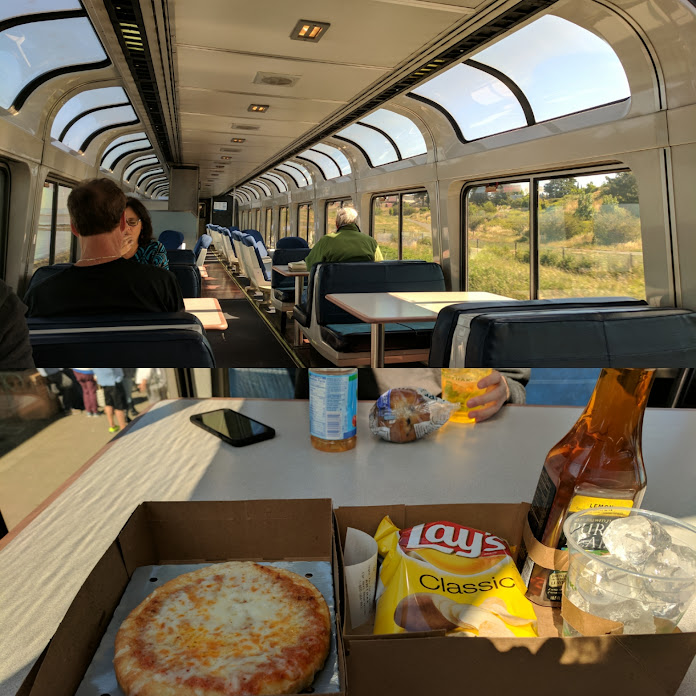 The people taking the train were an interesting bunch. Most passengers were elderly who either preferred not to fly, were too afraid to, or simply longed for older means of transportation. I met many who grew up taking trains to the heartland where aunts and uncles used to live. Around Chicago, we saw many Amish families as well. There was definitely a crowd of younger people who had a rather hipster vibe to them, along with many Europeans who seemed used to taking the train for longer distances.

Like Derek, I stopped in Salt Lake City, Denver, Chicago, and Albany before eventually heading to New York City. His blog post has plenty of amazing pictures, or you can see the photographs I took in my Google photos album.

Overall, I found taking the train to be extremely relaxing. Almost immediately I lost track of the day of the week and just lived in the moment. The days had a gentle monotony to them - wake up, eat breakfast, go to the viewing cabin and just work on my novel. I think while many will find this mode of transportation a bit boring, I could definitely do it again. There were absolutely stunning sights on either side of me in the viewing cabin, there was no traffic to deal with, and ultimately I just wasn’t in a hurry to go anywhere. The journey really was the destination, and I thoroughly enjoyed it.