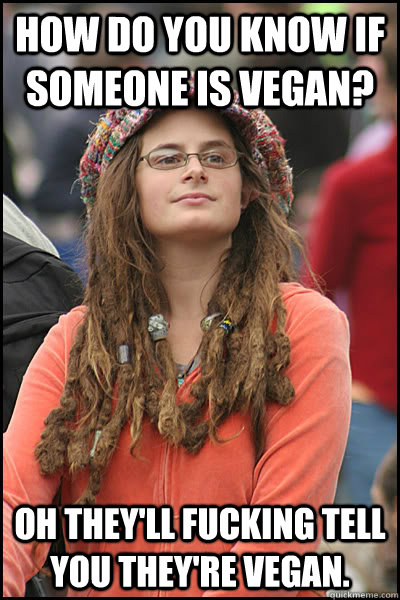 It’s been a couple months now, and what started out as an experiment has grown into a way of life for me. I had been dabbling with the idea of going vegan on and off for some time, but ultimately I could never pull the trigger. Ultimately, there were two issues that always prevented me from finally diving in - convenience and taste.

I liken veganism to motorcycling in many ways - you can have fun, but you need to be prepared. You don’t get to just hop into your car in your pajamas and sandals, blissfully anaware of the coming rainstorm, and expect to have a good day. You won’t. Planning ahead is important, but I’ve hit that age when impromptu whims don’t appeal to me in the way they once did.

For example, never assume that a gathering that has food has vegan options. This wasn’t a huge issue for me anyway, as even when I wasn’t vegan I was somewhat strict about my diet, so I’d typically eat beforehand and just have a small appetizer. This is doubly important now that I’m vegan. Alternatively, Ahana and I often just eat after the event.

The most important planning is done during the grocery store trips. Having delicious and healthy vegan snack options made it significantly easier for me to stick to veganism. We had a brief transition period where Ahana and I ate all of the non-vegan snacks, but after that I haven’t looked back.

At work, Stripe (and most tech companies, I’d imagine), has fantastic vegan options. Every meal has a plethora of healthy, protein-rich vegan selections that are tasty, so it never felt like I was missing out.

Chocolate oat milk has replaced chocolate milk for me - it has way less sugar and many of the brands use pea proteins which I really like.

Vegan cheese has a long way to go though. In general I’d recommend just choosing dishes that don’t have cheese.

Can you tell which side is vegan? 😭

I don’t regret going vegan at all, but vegan cheese as a long way to go 😂 pic.twitter.com/krrtkyRUod

There’s plenty of fake meat options from Beyond Meat to Impossible Foods to Gardein. While nice to have, these really don’t appeal to me as much as they do for the average American. I grew up vegetarian, so I don’t find myself craving the meaty texture that most others do. Indian foods in general tend to be higher in taste than texture, so as long as the food is well-spiced, I’m generally happy. Plus, I’m not entirely convinced that these meat substitutes are that healthy. I often see very high levels of sodium and oils in these products, and I’d caution anyone from making these a staple in their diets.

For those that absolutely cannot go without the meaty texture, I’d recommend Butler soy curls - they come with a vegan seasoning that makes it taste much more meat-like. It’s my personal favorite of all the substitutes.

Overall, my life really hasn’t changed all that much - which is pretty much what I hoped for! I do notice I have significantly more energy when eating healthy vegan meals and don’t experience the typical post-lunch crash as I often used to.

How vegan am I?

I’m not the ultra militant vegan that seems to be caricatured everywhere. I don’t mind eating bacteria (yeast is okay), and while I prefer not to have honey, if I accidentally find out something I ate had honey, that’s fine. I draw the line at animals more so than insects - but don’t worry - even when I wasn’t vegan I refused to eat cricket chips 🤮.

I think by now almost everyone knows the environmental reasons not to eat meat. Beef is the largest cause of deforestation, with soy and palm being a distant second and third. Meat is causing a global water shortage, and runoff from meat farms are polluting the global water supply, so what little water there remains will not be potable. Over 90% of the antibiotics used in the world is for meat, and it’s the largest cause of new antibiotic resistant strains of bacteria, endangering all of us. Of course, in the middle of a pandemic-induced quarantine, that should be obvious. And of course, it’s one of the largest causes of global warming. There are, of course, many many more issues.

For the most part, I’ve found that these reasons don’t really convince the majority of people to change their habits. When faced with problems on such a global scale, most people (for good reason) can’t relate; it’s easy to distance yourself (even if I stop eating meat, no one else will… or what’s one extra hamburger). I felt the same way. The science is pretty clear at this point that there is no going back - the world is forever changed, and we’re on the unchangeable course to irrecoverable loss of biodiversity and forests - and along with that, a large portion of humanity, too. For me personally, I’ve had a bleak acceptance of our impending doom in a couple hundred years.

This is part of the reason I don’t side with the ultra militant vegans. The world as we know it is doomed already - one hamburger isn’t going to make a difference. We’re literally talking about the extinction of all insects within a century.

Ultimately what changed my eating habit is that going vegan was potentially more healthy for us, too. I’d been on a related track of reading about vegan athletes when The Game Changers documentary came out. I won’t go on and on about the various claims made here, but I followed up on the sources presented there (with my very limited nutrition understanding), and I found the evidence extremely convincing.

I don’t think veganism is for everyone. Specifically, if you’re in a food desert with limited options or unwilling to really prepare, then veganism definitely is not for you. But if you’re an athlete, or you’re in a relatively food-rich country preparing your own meals, then it’s definitely for you. I think the evidence - especially when considering the quality and source of the evidence - shows without a doubt that veganism can be for everyone.